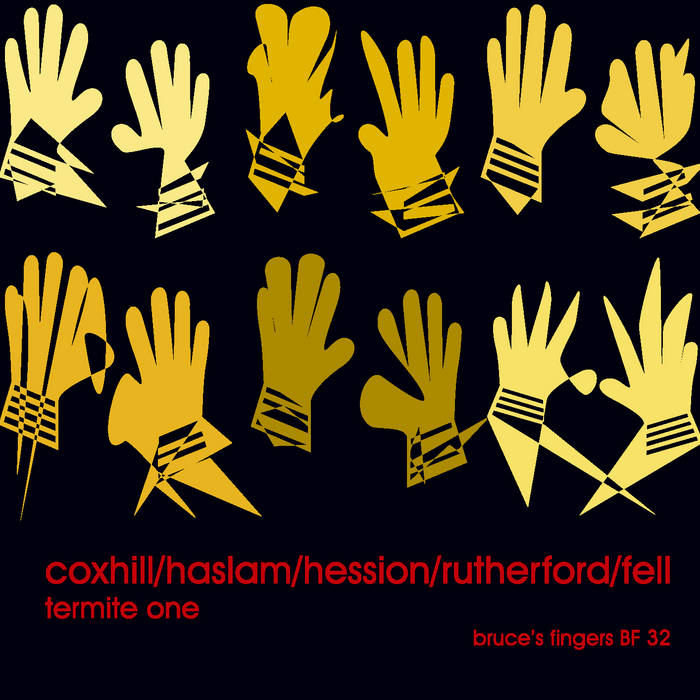 A freewheeling session captured live at 1989's Termite Festival. All concerned are in great form!

"The rawness and spontaneity of this Bruce's Fingers reissue fills me with a great nostalgia for the kind of 'backroom of the pub gigs' which formed most of my formative experiences of free improvisation; these recordings have huge energy, intensity and excitement. The presence of heavyweights Coxhill and Rutherford gives the music a constant injection of fresh ideas and there is a unity and consistency to proceedings. The recording quality is not ideal but it does give them a documentary feeling, actually helping to capture the atmosphere of the occasions."
Bruce Coates RUBBERNECK

"Regardless of the music's designation, the super group of veteran British improvisers that convened for its creation virtually assures that the results are going to be worth hearing. Fortunately this quintet does not disappoint. This CD is one that fans of these players will want to take the time and check out."
CADENCE

"As Simon Fell moves compositionally onward and outward, it's invigorating to hear him stretched as a bassist in this tumultuous tussle at the Termite Club in Leeds in 1989. George Haslam's baritone sounds wonderfully surly on this occasion, with Paul Rutherford's trombone adding muscle as well as his usual unexpected twists and turns. Lol Coxhill's soprano weaves snarling through the brawn. The redoubtable Paul Hession wades in from his kit and Fell shows what stern stuff he's made of."
Julian Cowley THE WIRE

"It sounds as if this was a terrific gig. With Lol Coxhill and George Haslam on soprano and baritone, respectively, there are nearly infinite tone worlds to explore, and when Paul Rutherford's trombone is added, the middle range becomes one of ringing, malevolent bleating. It's the rhythm section that has the most difficult job here (don't they always) in trying to keep the thing moving but not so far off the ground there's no return. The gig is one long improv with serious legato duels between Coxhill and Haslam; they turn and loop around each other, barely leaving Rutherford room to keep the middle droning through. His screeches and honks are almost bandstand-stopping for their suddenness and intensity. This is one free-flowing, energy-packed jam session at which everyone on the stand had a ball, worked up a sweat, and never thought about it again. Fortunately for us, we have this little CD, which tells a pretty convincing story - that in 1989 the state of Brit free jazz was healthy indeed."
Thom Jurek ALL MUSIC GUIDE

"What this quintet sacrifices in formal structure, it more than makes up for by the expression of a communicative vitality. The explosive rhythm duo are revealed as a formidable propulsive unit, but one which also knows how to adapt to the specific character of each wind player; and when it's a matter of following the unpredictable Lol Coxhill, it becomes a high voltage experience. Essentially, this is a music which doesn't reveal itself in fussy details; its effect lies in its spontaneous and generous spirit. The recording deserves reissue, even with its technical limitations; the quality of most of Charlie Parker's recordings also leaves much to be desired, but would that be a sufficient reason to deprive us of them?"
Gustave Cerutti IMPROJAZZ

"Climb into a time machine and travel back 1989 in Yorkshire, England when the weather was autumnal cool, but enough heat was being generated from an ad hoc collection of improvisers to incinerate a block of council flats. Souvenir of Leeds' first Termite Festival, this CD should demolish the idea that all British improv is hushed and effete as completely as termites devour wood. As a matter of fact, there are times while listening to the almost 49 minute disc, that it sounds as if the two saxophonists, one trombonist, bassist and drummer are hungrily chomping through the music the way soft bodied white ants wreck havoc on a house's structure. Initially recorded on a Sony Pro Walkman cassette machine, the strength of the four pieces on this CD reissue is conspicuous enough to overcome any technical weaknesses, which would probably only perturb committed audiophiles. Manoeuvring their way through four lengthy instant compositions - the shortest is a shade under 10 minutes - go for-broke improvisations from the five evoke the intensity of 1960s' Energy music. In fact, there are times when Haslam's gamy baritone saxophone expositions resemble the impassioned tenor saxophone work of Archie Shepp during that era. With Haslam holding down the bottom end, there's enough space left on top for Coxhill's soprano vibrato to wiggle its way through some vaguely Middle-Eastern sounding permutations. Rutherford gets somewhat of a showcase for some fleet slide work, plus double and triple tonguing at the beginning of Termite One Three, sharing the spotlight with some cross sticking and press rolls from Hession. Elsewhere, the organized cacophony accumulates, then divides and subdivides as the horns use a variety of vibratos, overblowing and trilling effects. At one point Coxhill's whine blends with Rutherford's smears and spritzes, elsewhere it faces off against Haslam's baritone rumble as motifs and counter motifs abound. In short, if you want to hear a one-off formation of northern instrumentalists at the height of their powers, performing spur-of-the-moment improvisations, then this CD will be for you."
Ken Waxman JAZZ WEEKLY

"Recorded on November 11, 1989, as part of a festival organized by northern England's legendary new music nightspot, the Termite Club in Leeds, this gritty quintet features bassist and Bruce's Fingers label boss Simon H. Fell in the company of improv titans Lol Coxhill (soprano sax) and Paul Rutherford (trombone) and muscular free jazz bruisers George Haslam (baritone sax) and Paul Hession (drums). A lot of ink has been spilled over recent years as to what exactly constitutes the difference between free jazz and free improv, but while musicologists and critics have been arguing over the fine points, the musicians themselves have, as always, gotten on with business. The four extended tracks on Termite One are in effect both — arguably "free improvised jazz": there's the open form of improv and a free flow of ideas not derived from or dependent on a theme, but at the same time the music respects structural principles associated with jazz in its alternation of solo and ensemble passages. Whatever you choose to call it, it's 100 percent live (and well remastered in 1999) and 300 percent alive, brimming over with energy and creativity, and the five musicians are in spectacular form throughout."
iTunes

Bandcamp Daily  your guide to the world of Bandcamp